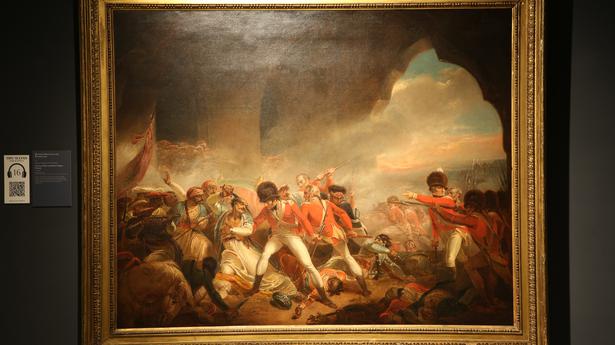 An exhibition on the erstwhile Mysuru ruler, by the lens of the East India Company’s painters

An exhibition on the erstwhile Mysuru ruler, by the lens of the East India Company’s painters

Dramatic lighting and black partitions set the temper for the viewing of historic paintings devoted to Tipu Sultan, the enfant horrible of British India, who made Company officers quake of their boots.

‘Tipu Sultan: Image & Distance’, Delhi Art Gallery’s (DAG) exhibition of over 90 artworks, together with prints and maps, curated by Giles Tillotson, brings to life the colorful but propagandist narratives behind the Mysuru ruler as seen by the eyes of East India Company painters. There can be an accompanying guide on the topic, authored by the curator.

Perhaps essentially the most dramatic of the oils on show is the one by Henry Singleton (1766-1839), which reveals Tipu along with his turban thrown off, his sword drawn, and a British soldier grabbing him firmly by his arm because the others encompass the remaining of the Sultan’s posse. One can see a combination of defeat and bravado in Tipu’s expression as he tries to withstand until the very finish. Titled ‘The Last Effort and Fall of Tippoo Sultaun’, the paintings, created for a British viewers a lot after the Fourth Anglo-Mysore War it depicts, is being proven in India for the primary time.

“Tipu Sultan posed the most powerful challenge to the might of Britain’s East India Company in the period of its greatest territorial expansion,” writes Tillotson. Building on the legacy of his father Haider Ali, in the course of the course of his comparatively quick reign as ruler of Mysuru, Tipu (1782-99) proved to be an environment friendly and agency governor of his state, versatile in forming alliances however able to be aggressive in the direction of his neighbours,” he says.

While Tillotson firmly needs to remain away from the raging political conversations round Tipu within the wake of the correct wing’s pushback, he does acknowledge the historic significance of doing a show resembling this in India. “Bucking the trend of Indian works of art being exported abroad, we decided to bring this material to India, to display to Indian audiences,” says Ashish Anand, MD and CEO of DAG.

The exhibition consists of a massive physique of works — paintings, prints, maps and different objects — and crafts a story across the Mysore Wars fought by Tipu and his father Haider Ali. The photos are naturally based mostly on the British view of the time, however they’ve been critically examined by curator Tillotson to replicate the altering perceptions of this epic battle and its political and social fallouts.

With this exhibition, Anand and his staff of art specialists search to make the general public query themselves on the place they stand with respect to Tipu. “Some idolise him while others are fiercely dismissive of his contributions. What cannot be disputed is that he was the most formidable foe the British faced in India,” he says. “How these images are interpreted in India today is what this exhibition explores.”

The author is a critic-curator by day, and a artistic author and visible artist by evening.

The chisel meets its match in Maniam’s palette