From MF Husain to KCS Paniker: Rare works by India’s greatest artists on display in Chennai 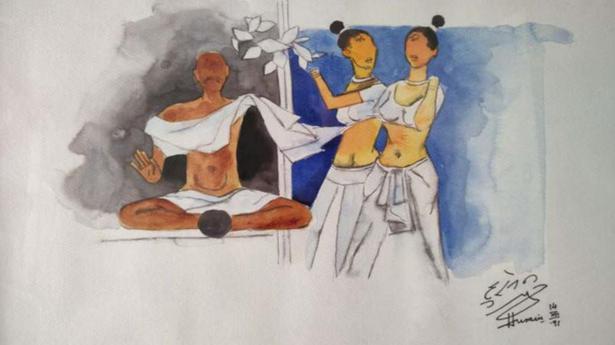 Explore an intriguing assortment of Indian modern artwork, together with uncommon early works by luminaries of the Madras Art Movement and the Bengal School, from the non-public assortment of the late entrepreneur Pradipto Mohapatra

Explore an intriguing assortment of Indian modern artwork, together with uncommon early works by luminaries of the Madras Art Movement and the Bengal School, from the non-public assortment of the late entrepreneur Pradipto Mohapatra

Sanghamitra Mohapatra’s earliest reminiscences with artwork are positioned in the sprawling Cholamandal Artist’s Village: each Sunday, as a bit woman, she can be left to play with different kids as her father, entrepreneur Pradipto Mohapatra, caught up along with his artist mates and even perhaps picked up a canvas or two on the best way out. Most of those artists went on to grow to be the greats of the Madras Art Movement.

She admits to having no clue of who they have been or what they did till a lot after. Today, she wraps up a really difficult five-year mission: painstakingly cataloguing her late father’s huge assortment of artworks, with a sensitively curated present at Focus Art Gallery to honour his ardour for artwork.

An MF Husain stands nearly hidden on one of many crowded partitions of Focus Art Gallery. Yet, it’s unmissable. A easy watercolour on paper, characterised by the artist’s early brushstrokes, the work reveals two ladies, maybe dancers, accompanied by a meditating saint in whites. Inside, a whole wall options the Bengal School as Ajay De’s birds are captured in arresting shadows, and Suhas Roy’s lovely pastel works of the feminine type sit beside types of Christ, personalised by totally different cultures and artists in their very own regard. Just a few sculptures, principally in stone and steel, additionally make an look.

Collectively, they type round 275 works that span veteran artists, different faculties of thought, and altering types that Pradipto Mohapatra, the person behind retail chains like FoodWorld, MusicWorld, Health & Glow and HMV India, collected over 40-odd years.

Sanghamitra remembers him as “the picture of health”, affable with a eager curiosity in horology and historic artifacts. Mohapatra beloved his artwork and watches. “As for art, He was a huge fan of the Bengal School of Art, and the Madras Art Movement. He had a deep understanding of the Bengal School and the history of it,” says Sanghamitra. His father-in-law was an avid collector too. “Between father-in-law and son-in-law, a lot of notes were exchanged,” she remembers. This can be how a number of works that characterise the Bombay School, like KH Ara, made it into the gathering. The display is an enchanting stroll by means of evolving ideas, concepts and sensibilities.

In a set as huge as this, courting and analysis pose unavoidable challenges. To make sense of the gathering and devise a free narrative, Sanghamitra did her personal analysis into every of those artists’ lives. “Then there are provenances for each artwork: authenticity papers and invoices which give us an idea about the mediums and the prices. Some of them were bought pre-1990s, and don’t have the authenticity papers. For those, I had to dive into each piece, reach out to the family or an expert in the field to put the certification together,” she says.

A whole lot of the items from the Madras Art Movement are early works of the artists, procured across the Nineteen Eighties, earlier than they even shot to fame. Pointing to RB Bhaskaran’s oils and acrylics on canvas that includes his common cats, Sanghamitra remembers, “He had no love for cats. But he bought a lot of work with cats for us. My mother’s side of the family was avid cat-lovers.”

While there is no such thing as a set narrative to the display, the viewers are welcomed by the Madras Art Movement, and portraits who’re then inspired to journey to the Bombay and Bengal Schools, whereas passing by some summary works on the best way. Did Mohapatra have a favourite artist? “He loved [C] Douglas. In the Bengal School, he had a special love for the Tagores: ofcourse, we do have a few scribblings of Rabindranath Tagore.” However, they don’t seem to be a part of the display.

Why does she need to half with such an exhaustive assortment? A whole lot of it boils down to the perils of preservation. Mohapatra had an affinity in direction of paper-formats: ink on paper and watercolours. “But they need to be on a wall, and aired,” says Sanghamitra, including, “More so, they need to be appreciated and seen. There is no point in them being in our storage.”

The assortment is on display at Focus Art Gallery, Alwarpet, from July 22 to 24. It is open to all.